How a Boomerang Works

Boomerangs were the world’s first heavier than air flying machines, used most famously by the Australian Aborigines, but also found in other ancient cultures in Egypt, stone age Europe and the Indian Sub Continent. No-one knows how they were first invented and even though they look simple, they use a very complex combination of physics and aerodynamics to perform their amazing returning flights.

A returning boomerang is basically two wings joined at an angle of between 80o and 120 degrees, although it can have more than two wings. The wings are arranged so they work best when the boomerang is rotating rather than flying straight like an aeroplane. The combination of spin with forward motion causes uneven lift on the wings because at any given time, one wing is rotating forward in the same direction as the flight, while the other is rotating backwards, against the direction of flight. This means the air flow over the wing on one side of the disk of rotation has a higher airspeed than the other wing and so generates more lift. The uneven lift tries to tip the boomerang over, but just like leaning a moving bike over makes it turn, the boomerang’s spin twists the tipping force at right angles and gives the boomerang a curving flight. Another tipping force, caused by the centre of lift being forward of the centre of gravity, is also twisted to make the boomerang “lie down” in flight. The name for both these twisting motions is gyroscopic precession. The illustration above shows how it all comes together to make the boomerang fly in a circle and (given some skill) come back. 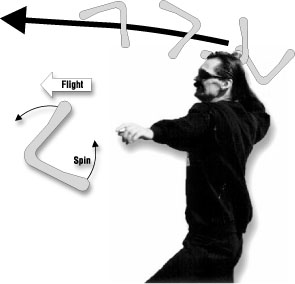 Boomerang is launched close to upright (vertical), 45 degrees to the right of the wind* and aimed upward at 5 degrees (just above horizon). The boomerang is gripped firmly with the flat side away (to the right*) and cocked back as far as comfortable to impart maximum spin.

*Left handed throwers should use a left handed boomerang and throw 45 degrees to the left of the wind. The boomerang should be held with the flat side to the left. 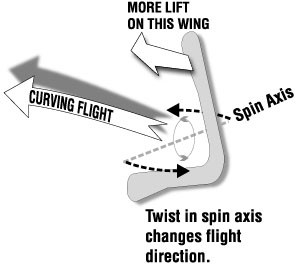 Spin plus forward motion causes uneven lift on the boomerang’s wings. The wing at the top of the cycle has it’s spin motion added to it’s forward motion, producing a higher air speed and more lift than on the other wing. This uneven lift across the plane of rotation produces a tilting force on the spin axis. Because of gyroscopic precession, this force on the axis is twisted at right angles causing the boomerang’s flight to curve into a circular path. 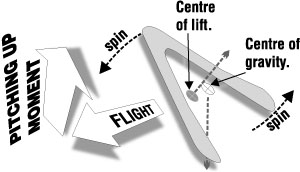 The distance between the boomerang’s centre of lift and centre of gravity causes front edge of disk of rotation to rise (pitching up moment). Because of gyroscopic precession, this force on the axis of spin is twisted at right angles, making the boomerang “lie down” in flight. This aligns more of the boomerang’s overall lifting force aginst the force of gravity, causing it to rise and sustain soaring flight, rather than crashing to the ground. 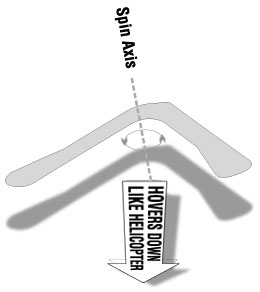 Towards the end of the flight, the boomerang’s axis of spin has been twisted to 90 degrees from it’s launch orientation. Effectively, this means that the boomerangs is now rotating horizontally and the remaining lift being produced by the wings is acting optimally against gravity, producing a slow, hovering descent. A well made and thrown boomerang will by this time have used up its forward motion due to the complex interplay of aerodynamic and gyroscopic forces which causes the boomerang to “brake” in flight. Interestingly, its spin rate now increases slightly to conserve angular momentum, futher slowing its descent. The overall energy of the boomerang has by now been depleted by aerodynamic drag and being used up in acclerating the boomerang into curving flight. At this point it can be caught (carefully). 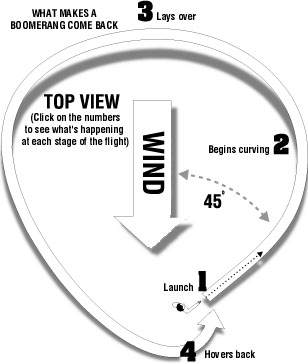 The animation below shows a typical basic boomerang flight. The various stages numbered in the top view can be clicked for more explanation of the principles involved.